We are focused on answering fundamental questions, such as how does the brain work? And at the same time asking how a disease state can upset brain function. This fundamental knowledge is then applied to identify new potential drug targets.

Much information is now available on which genes are implicated in particular diseases. Genes are the instruction book, but the proteins they code for are what we're interested in. They are the molecular machines of the cell and the targets of therapeutic drugs.

After genes are coded into proteins, the proteins are then ‘decorated’ with multiple chemicals, called post-translational modifications (PTMs). PTMs alter protein behaviour/function. The Synapse Proteomics Group focus on defining protein PTMs and how they affect protein function.

The proteins we are particularly interested in are crucial for the formation of vesicles. Vesicles are tiny 'cells within cells' which are made from the cell membrane. Vesicles are used to store neurotransmitter in the brain, and vesicle formation is also necessary for the transport and degradation of crucial environmental signalling molecules, e.g. those involved in inflammation.

The high fidelity production of vesicles is a crucial cellular process that is important for many diseases, but detailed mechanistic information on the proteins involved is still lacking. We aim to fill in these critical gaps in our knowledge so we can develop better treatments for such diverse diseases as epilepsy, Alzheimer's, and childhood leukaemia.

Developing treatments for diseases requires knowledge of the genes involved, the proteins they code for and how to target those proteins with drugs to change the disease state. Specific extra knowledge is required to know the best way to attack the problem. We need knowledge of what the disease-related protein does and which enzymes and binding partners influence the protein function. The Synapse Proteomics Group uses advanced technology to identify enzyme pathways and map interacting protein partners for disease-related proteins. 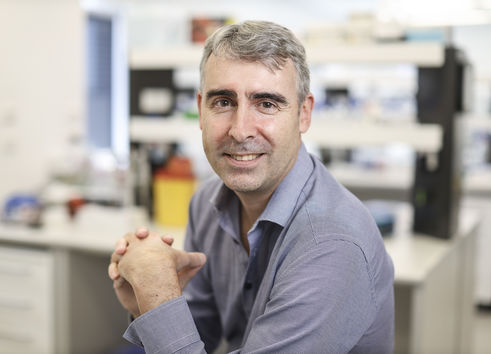 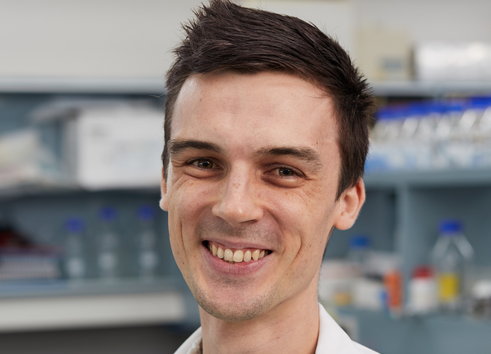 The synapse is centre stage for many brain diseases. Many disease-related genes have been identified that code for proteins involved in neurotransmitter release, synapse morphology, and synaptic plasticity. A major focus of the Synapse Proteomics Group is the synaptic vesicle cycle proteins involved in disease.

Endocytosis is a fundamental process that occurs in all eukaryotic cells. Defects in endocytosis limit the ability of a cell to internalise molecules and properly respond to environmental queues. Defects in endocytosis also affect exocytosis and intracellular trafficking because these processes are reliant on the proper sorting of the exocytic machinery during endocytosis. This is particularly important in the brain where cyclic exocytosis and endocytosis is required to maintain neurotransmission. The most well understood mode of endocytosis is clathrin-mediated endocytosis (CME). CME involves the formation of a lattice-like clathrin coat over the budding vesicle. Clathrin assembly proteins are responsible for making vesicles of a consistent size and shape. We are focused on defining the molecular mechanism of events during assembly of the clathrin coat, including the signalling events mediated by post-translational modifications.

A better understanding of neurotransmission will help us determine what goes wrong in a range of diseases like epilepsy, autism and Alzheimer’s disease. It also tells us about normal learning and memory.

AP180 and CALM are a major focus of our group. Both are clathrin assembly proteins. AP180 is only found in brain and forms small vesicles in the synapses of neurons. The mechanism of clathrin assembly by AP180 is not yet well understood. The gene for AP180 has been implicated in bipolar disorder.

CALM is found in all cells of the body where it is involved in receptor internalisation which has implications for both Alzheimer’s and leukaemia. The fusion of CALM and AF10 via chromosomal translocation causes an acute leukaemia. A better understanding of CALM function may lead to therapeutics that can better target and potentially prevent the aberrant functions of this fusion product.

Polymorphisms in the gene for CALM have been found in Alzheimer’s patients. CALM may have a role the clearance of amyloid plaques or the processing of amyloid precursor protein (APP). CALM is known to be involved in APP-trafficking, so it could contribute to Alzheimer’s by trafficking APP to where it can break down and eventually form plaques. Understanding how CALM works will allow us to achieve the ultimate goal of finding subtle ways to regulate endocytosis and modulate its function to treat these diseases.

Post-translational modification, which is the addition of molecules to a protein after it has been made, often significantly changes protein function. Therefore, rather than directly targeting a disease-related protein with a drug, it is possible to change protein function by targeting the enzymes involved in protein post-translational modification. We study protein phosphorylation, since it is the most common post-translational modification. We measure changes to the level of phosphate on both individual proteins and sometimes thousands of proteins at once to determine normal phosphorylation signalling that occurs presynaptically during neurotransmission. Phospho-signalling directed at disease-related proteins is picked up in these screens. The phospho-signalling pathways can potentially be exploited as a targeted way to treat disease.

We have identified novel activity-dependent signalling to proteins involved in Alzheimer’s disease, autism and epilepsy. Our signalling network data also fills in a major gap in our fundamental knowledge of presynaptic neurotransmission and this is where we aim to add significantly to global efforts to model brain function.

A novel method for the simultaneous enrichment, identification, and quantification of phosphopeptides and sialylated glycopeptides applied to a temporal profile of mouse brain development.

Phosphorylation of dynamin II at serine-764 is associated with cytokinesis.

Autophosphorylation and ATM activation: additional sites add to the complexity.

Differential phosphorylation of dynamin I isoforms in subcellular compartments demonstrates the hidden complexity of phosphoproteomes.

The in vivo phosphorylation sites of rat brain dynamin I.

Demonstrated that phosphorylation sites in identical contexts on multiple protein isoforms can have very different regulation.