The Cell Biology Unit focuses on one of the major factors in at least 85% of all cancers affecting children and adults: the molecule telomerase.

Cancer cells use telomerase (an enzyme employed by at least 85% of all cancers affecting children and adults) to keep growing uncontrollably; thus telomerase is a key target for future cancer treatments, which are predicted to have fewer side effects than current radiation and chemotherapy. Conversely, inherited mutations in telomerase can lead to devastating bone marrow failure disorders.

We aim to understand the biological and biochemical properties of telomerase in order to rationally design better anti-cancer treatments with fewer side effects and determine how to boost telomerase in patients with inherited bone marrow failure.

Blocking telomerase could become an effective therapy for cancer, displaying broad scope for many types of cancer while also being specific for cancer cells, resulting in fewer side effects than current therapies. There are many gaps in our knowledge of how telomerase works. This not only makes it a fascinating enzyme to study scientifically, but also means that we have much to learn before rationally designing telomerase inhibitors as potential therapeutics.”

The ends of eukaryotic linear chromosomes end in repetitive DNA repeats called telomeres. In humans, chromosomes end in ~5-15 kilobase pairs of the tandem repeat 5′-TTAGGG-3′; this is terminated with a few hundred nucleotides of single-stranded TTAGGG repeats, leaving a 3′-overhang. Telomeric DNA is further bound with sequence-specific binding proteins in a six-protein complex termed ‘shelterin’.

Together, these structural features provide a protective cap to distinguish the end of the chromosome from an internal double-strand break, thereby protecting chromosome ends from aberrant DNA repair and recombination.

A dynamic feature of telomeres is that they shorten during every cycle of DNA replication and cell division; this shortening is a consequence of the inability of the DNA replication machinery to fully replicate to the end of a linear template. In humans, telomeres shorten by ~50-150 base pairs through each cycle of DNA replication. When telomeres have shortened sufficiently, the cellular senescence program is activated, resulting in permanent withdrawal from the cell cycle. Telomere shortening is a powerful and essential tumour suppressor mechanism; unless nascent premalignant cells can prevent it from occurring, they will eventually stop dividing and be unable to form a tumour. Cells that have high or unlimited proliferative capacity must have a mechanism to counteract telomere shortening.

Telomerase is the ribonucleoprotein enzyme complex that catalyses the addition of telomeric DNA repeats. The catalytic protein component, Telomerase Reverse Transcriptase (hTERT in human telomerase), catalyses nucleotide addition onto the 3′-end of the telomere and contains the conserved reverse transcriptase motifs common to retroviral RTs. The RNA component (hTR in human telomerase) directs nucleotide addition by providing a template for reverse transcription that is complementary to the telomeric repeat sequence.

A telomere maintenance mechanism is essential for a cell to bypass senescence as a response to short telomeres. While most normal cells lack a telomere maintenance mechanism, excessive and dysregulated telomerase activity is strongly associated with cancer. By expressing abnormally high levels of telomerase, cancer cells are able to avoid telomere shortening and thus bypass senescence, thereby becoming immortal. Telomerase is expressed in ≥85% of all human cancers and is considered a prime target for anticancer therapeutics through the development of telomerase inhibitors.

While most normal human cells have silenced expression of telomerase, it remains important for the maintenance of stem cells, particularly in the haematopoietic system. Individuals who inherit mutations in the genes encoding hTERT or hTR, or other telomere-binding proteins, suffer from a spectrum of diseases known as Telomere Biology Disorders, with symptoms including bone marrow failure, lung fibrosis, liver cirrhosis, and predisposition to malignancies. Increased understanding of telomerase enzymology is leading to insight into disease mechanisms in families with Telomere Biology Disorders. 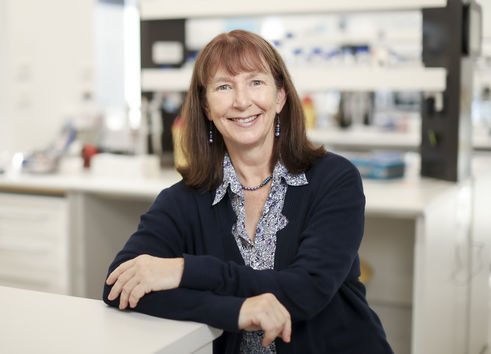 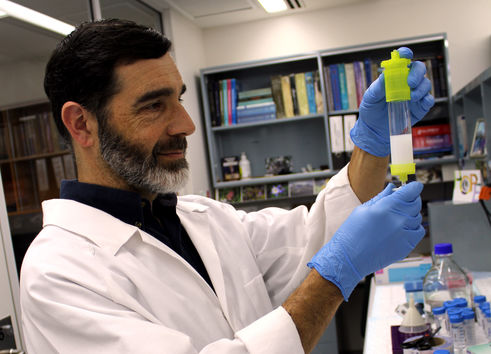 Senior Research Scientist, Dr Scott Cohen, has been studying the human telomerase enzyme since joining CMRI in 2003. His research interests encompass the enzymology and structure of human telomerase as a means to develop specific and potent small-molecule inhibitors of telomerase as potential cancer therapies. 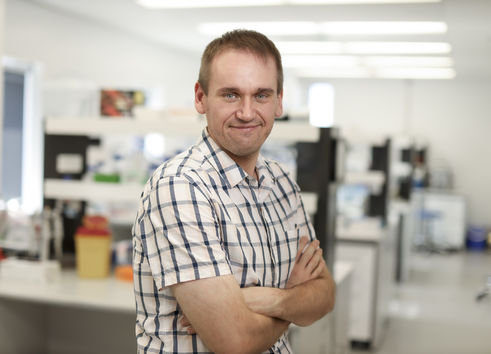 Ashley completed his bachelor’s degree at La Trobe University, where he then began working towards a PhD in mitochondrial genetics. He received his PhD in 2017 and subsequently joined the Cell Biology Unit at CMRI in 2018 thanks to generous support from the Profield Foundation. Ashley is currently working to understand the mechanisms behind telomerase recruitment to telomeres, and the impact that replication stress and telomere replication have on this process. 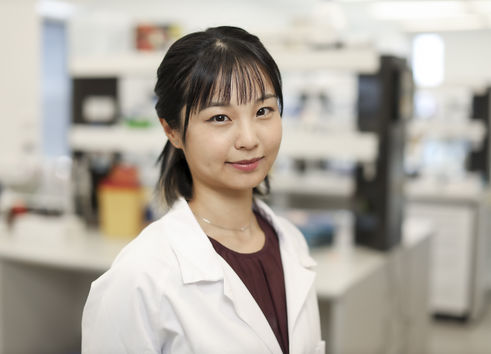 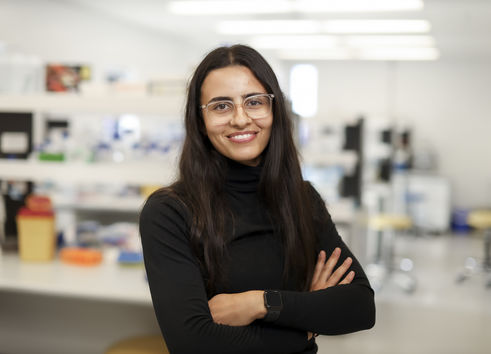 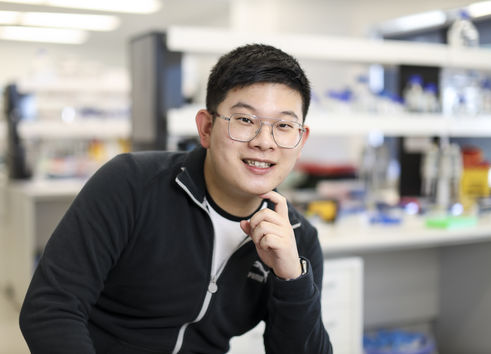 Research in the CBU

Our research projects are collectively directed at understanding the properties of telomerase at the cellular and biochemical level, including association with its telomeric DNA substrate, active recruitment of telomerase to the telomere, telomerase enzymology, and structure, with the long-term aim of using this knowledge to rationally design small-molecule inhibitors of telomerase as potential anti-cancer therapeutics, or develop ways to boost telomerase action as a treatment for inherited bone marrow failure. Much of our research is enabled by our ability to over-express and purify human telomerase on large-scale.

See below for descriptions of specific projects ongoing in the Cell Biology Unit for fellow researchers that may be interested in collaboration, or prospective students wishing to carry out their Honours or PhD research degrees in the CBU.

Interfering with the ability of telomerase to bind to its telomeric substrate provides a potential avenue for telomerase inhibition, through either direct inhibition of the enzyme, or indirectly through sequestration of its telomeric substrate. Telomeric DNA, owing to its repetitive G-rich sequence (TTAGGG), has the ability to form a compact folded structure called a G-quadruplex, wherein four guanine bases use Hoogsteen hydrogen bonding to form a stable square-planar arrangement.

G-quadruplexes were long thought to block extension by telomerase through sequestration of the single-stranded 3′-end. However, research in the CBU has revealed that a particular conformational subset of G-quadruplexes are indeed utilised as a substrate by human and ciliated protozoan telomerase (Oganesian et al., EMBO J 2006; Oganesian et al., Biochemistry 2007; Moye, Porter, Cohen, et al., Nature Communications 2015).

We collaborated with the laboratory of Professor Antoine van Oijen at the University of Wollongong to probe the mechanism of telomerase extension of G-quadruplexes using single-molecule fluorescence resonance energy transfer (smFRET) microscopy (Paudel, Moye et al., eLife 2020). Binding is initiated by the RNA template of telomerase interacting with the G-quadruplex; nucleotide addition then proceeds to the end of the RNA template. It is only through the large conformational change of translocation following synthesis that the G-quadruplex structure is completely unfolded to a linear product. Surprisingly, parallel G4 stabilization with either small molecule ligands or by chemical modification does not always inhibit G4 unfolding and extension by telomerase. These data reveal that telomerase is a parallel G-quadruplex resolvase.

We work extensively with small-molecule ligands that specifically stabilise G-quadruplexes. In collaboration with Dr Jennifer Beck in the School of Chemistry at the University of Wollongong, we aim to evaluate ligands that may be specific for a particular conformation of G-quadruplex. Such compounds are also a valuable tool for looking at G-quadruplexes at the cellular level. Our guiding hypothesis is that different conformations of G-quadruplex will perform distinct functions at the telomere.

Recruitment of telomerase to telomeres

Telomerase is a multi-subunit protein-RNA complex. The way in which these subunits are assembled into an active enzyme complex and then transported (“recruited”) to the telomere is complex and not fully understood. We have established in our laboratory a method to quantitatively detect telomerase at the telomere in human cells - not an easy task due to its extreme rarity, even in cancer cells. We have optimised the technique of Fluorescence in situ hybridisation (FISH) using a probe complementary to the telomeric DNA and concomitant FISH against hTR; colocalisation of the two probes indicates telomerase at the telomere.

A subset of inherited bone marrow failure (BMF) syndromes is caused by mutations in genes encoding telomere-related proteins, including hTERT and hTR. In these patients, telomeres become abnormally short, leading to BMF disorders known collectively as Telomere Biology Disorders (TBDs), including Dyskeratosis Congenita (DC). The causative gene remains unidentified in ~30-40% of DC patients, and our team leads novel gene discovery efforts in Australian TBD patients. Disease-associated mutation in the gene ACD, encoding the telomere-binding protein TPP1, was first described by us in an Australian patient (Guo et al., Blood 2014), and independently identified in a family in the USA (Kocak et al., Genes & Dev. 2014).

We are continuing to apply our expertise in telomerase biology to functionally characterise the impact of newly-identified patient mutations on telomerase biogenesis, trafficking and activity. Our laboratory has established a variety of biochemical assays, such as measuring the affinity K(d) between telomerase and its DNA substrate; the stability k(off) of the enzyme-DNA complex; and activity using a direct (non-PCR) assay (Cohen & Reddel, Nature Methods 2008; Tomlinson, Cohen & Bryan, Methods 2017).

These assays have been enabled by our established system of enzyme over-expression and purification, and have provided new insights into the complex interplay between substrate association/dissociation and conformational change(s) throughout the nucleotide addition cycle. For example, such enzymatic assays led to the conclusion that the region of hTERT known as the TEN domain contributes high-affinity binding to the DNA substrate, and also functions in positioning the 3′ end of the DNA in the active site (Jurczyluk et al., Nucleic Acids Res. 2010). We found that human telomerase binds its DNA substrate using a two-step mechanism involving active-site conformational changes (Tomlinson et al., Biochem. J. 2015), and we were the first to demonstrate that the C-terminus of hTERT provides high-affinity binding to the DNA substrate (Tomlinson et al., Biochimie 2016).

Our characterisation of the biochemical defect caused by newly-identified telomerase mutations in Australian bone marrow failure patients is enabling definitive molecular diagnoses for families carrying such mutations, and in some cases impacting on treatment decisions for the patients.

Elucidating a high-resolution 3-D molecular structure of the human telomerase enzyme complex is being led by Dr Scott Cohen. In biochemistry and enzymology, structure dictates function. Detailed knowledge of an enzyme’s structure can reveal its mechanism of action, provide an understanding of how mutations can cause disease, and facilitate the rational design of small-molecule inhibitors with therapeutic potential.

Dr Cohen is using electron microscopy to provide structural information. The image below shows individual molecules of highly purified telomerase, stained to enhance contrast. Close examination reveals that the molecules consist of two lobes connected by a narrow hinge, consistent with the conclusion of his 2007 Science paper.

Current efforts are directed towards obtaining high-resolution data using cryogenic electron microscopy (cryo-EM), wherein molecules are captured within a thin aqueous glass cooled in liquid nitrogen. Cryo-EM provides high-resolution images of molecules in their native state as they exist in solution and can also reveal conformational changes the enzyme may undergo.

The long-term aim of the lab’s research is to apply the knowledge of structure to the rational and targeted design of small-molecule telomerase inhibitors as potential cancer therapeutics. 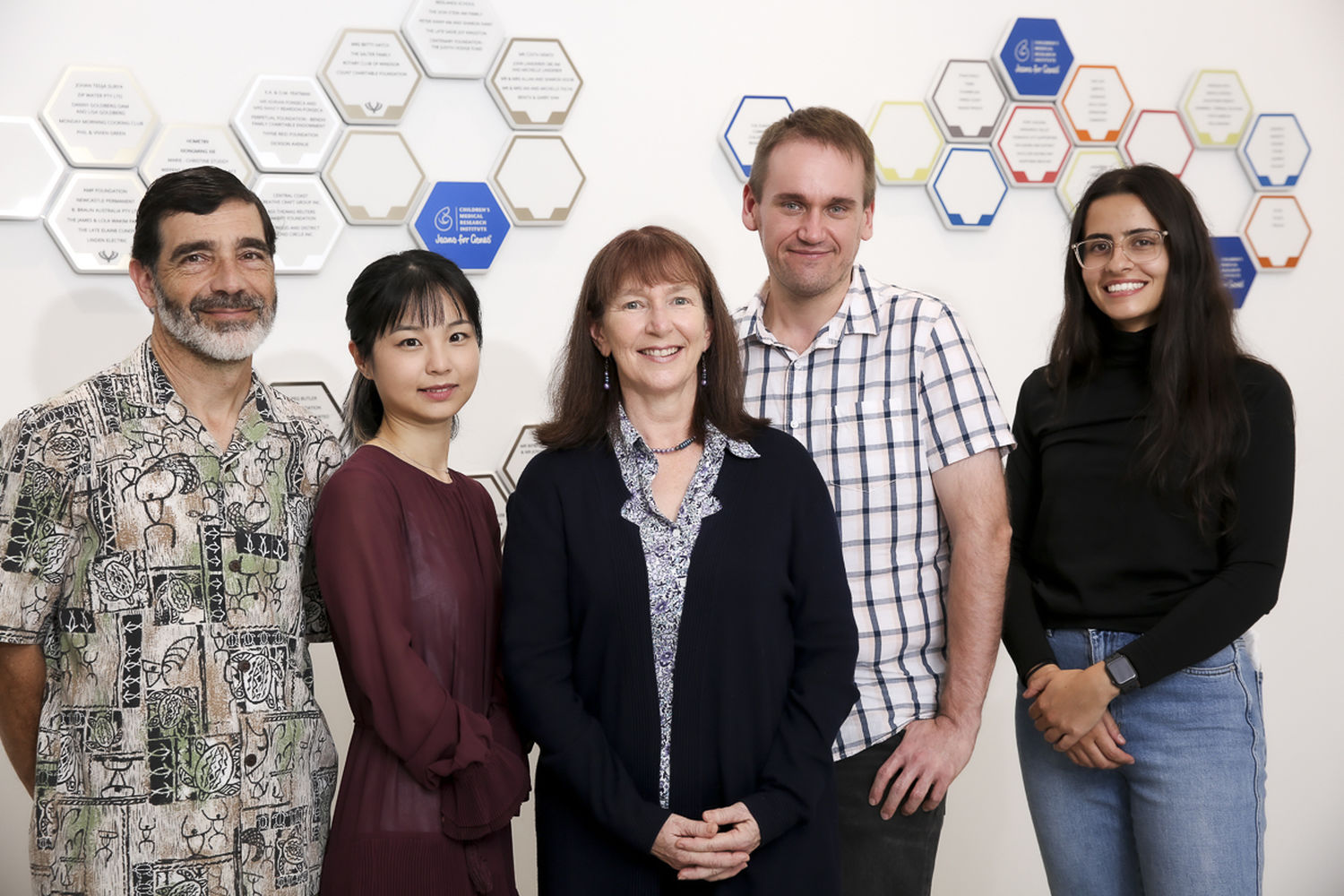 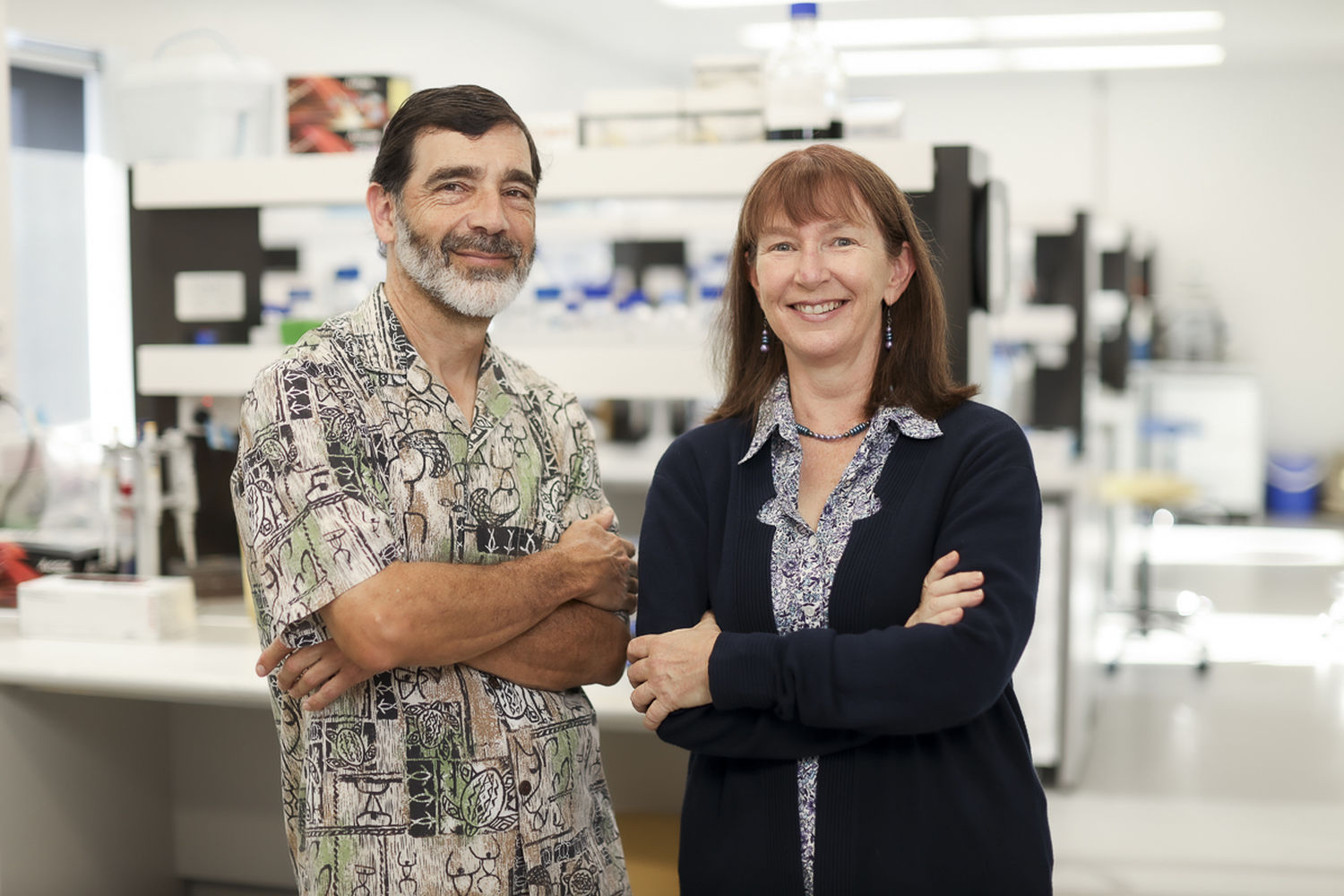 ATM and ATR Signaling Regulate the Recruitment of Human Telomerase to Telomeres.

Telomeric G-quadruplexes are a substrate and site of localization for human telomerase.

A mechanism for the extension and unfolding of parallel telomeric G-quadruplexes by human telomerase at single-molecule resolution.

This links to a full list of Dr Cohen’s publications on NCBI.

Demonstrated that telomerase can extend some conformations of G-quadruplex, contrary to dogma

Characterised the composition of endogenous human telomerase (published in Science)

In collaboration with colleagues at Northwestern University, Chicago, USA, demonstrated potent and irreversible telomerase inhibition by a new covalent inhibitor